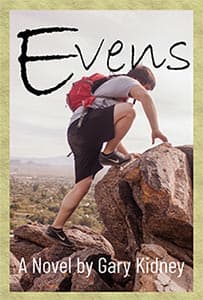 Evens is mature contemporary YA novel with crossover appeal to adults, complete at 87,000 words. Like the The Bridge of Clay, the novel involves a diverse gang of latch-key boys, a found family, who find themselves implicated in a crime. A mystery surrounds the crime compounded by secrets and lies, like Thirteen Reasons Why. The protagonist is on the autism spectrum and seeking to find a pathway toward a fulfilling life, similar to Curious Incident of the Dog in the Night-Time.

The summer before ninth-grade, fifteen-year-old Joey Davidson moves to Arizona with his single mother. He's never had a friend, but finds himself falling in with the Desert Rats, a platoon of six boys from his trailer park. As they learn of his autism, he discovers the secrets and lies complicating their lives. He meets Becca, and a relationship grows.

When "Bud," an elderly war hero, moves into the neighborhood, relationships change. One night, Bud's trailer busts into flame. Joey and Winkle, a member of the platoon, unsuccessfully try to save him. Investigators suspect arson and homicide with the boys as prime suspects. The scrutiny forces the boys into life-altering decisions for which they are unprepared.

Joey's greatest fear is being abandoned because his father left the family when Joey was diagnosed at age four. Now, his mother receives a diagnosis of aggressive cancer. Circumstances make him distrust his Uncle Timmy, with whom he lives. Becca's family is moving to New York City. Joey's greatest fear comes true as the investigation destroys everything around him.

Everyone wants to discover three things. Who killed Bud? And why? Bud's phone may contain some answers, but where is it?